The Devolo dLAN 550 and 550+ WiFi Starter Kits are sets of Powerline adapters that will boost your home network and your wireless reception.

Powerline is a neat technology that uses the power cables in your home to create a home network, as if you had Ethernet cables snaked through your house. This means you can enjoy much faster download times in your living room, for example, compared to using a ropy Wi-Fi connection that’s shared by everyone else in the house.

Powerline adapters are simple to set up. Plug one adapter into a power socket near your router, and then connect adapter and router with an Ethernet cable; then plug a second Powerline adapter into another room’s wall socket and connect that to the device you wish to have fast Internet access, such as your TV or streamer.

The principal technical upgrade is that the wireless capability jumps from 150Mbps to 300Mbps. The range has also been increased, from 300 to 400 metres. Wired speed remains at 500Mbps, so the 550 title is a bit misleading.

Increased speed and range are pretty much all you want from a wireless upgrade but you should remember that these speeds are theoretical maximums only – there’s no way that you’ll get 500Mbps wired or 300Mbps over Wi-Fi.

In real-world situations all sorts of speed limitations come in to play, so you’ll do well to get speeds over 150Mbps. This seems disappointing when you’re expecting 500Mbps, but anything over 100Mbps is going to whip your average wireless speeds.

All Powerline manufacturers tout their adapters as 500Mbps or at the top end 1,200Mbps, so you can’t blame Devolo for doing the same. It doesn’t distract (much) from the fact that Powerline is almost certain to hugely boost your Internet speeds in rooms away from your router.

Is the 550 worth the extra for the money? We appreciate the extra range and supposed speed increase, plus the pass-through socket and two Ethernet ports on the base adapter (the 550+ WiFi has pass-through sockets on both adapters), but the price appears high in comparison.

DEVOLO DLAN 550 WIFI: WHAT YOU GET

While Powerline itself is simple to set up, working out the names of each adapter can be confusing. The £99.99 dLAN 550 WiFi Starter Kit is actually made up of two different adapters.

The base adapter that you plug into a wall socket near your Internet router is a dLAN 550 duo+. This has two Ethernet ports (10/100 Ethernet, not the faster Gigabit Ethernet ports you get on the top-of-the-range dLAN 1200+ Powerline) and a pass-through socket.

A pass-through socket saves you losing a wall socket, and even improves Powerline speeds by minimising electrical “noise” on the line. 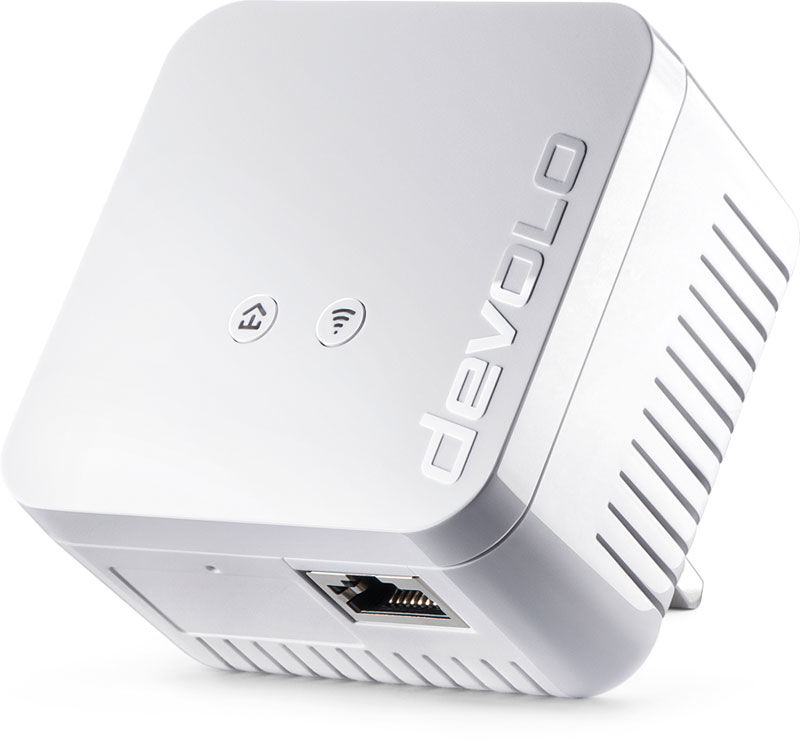 The second adapter that goes in the other room is the actual, improved dLAN 550 WiFi, which adds the extra Wi-Fi hotspot.

But this second-room wireless adapter has just the one Ethernet port. This puzzles me, as I’d have thought that having more than one Ethernet port in the second room would be more useful than another by the router, which may well have multiple unfilled ports itself.

It does mean that the second adapter is very compact, so won’t ruin the look of your home. 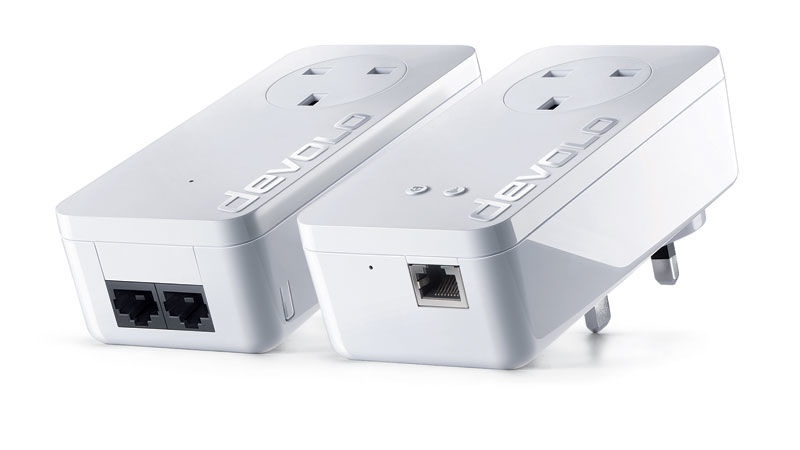 The £109.99 dLAN 550+ WiFi (pictured above) has pass-through sockets on both adapters, which makes its second-room adapter a little larger than the pass-through-less 550 WiFi.

Devolo’s naming system is confusing as so many variations sound similar, but the + here indicated pass-through sockets on both adapters. Otherwise the specs are the same. 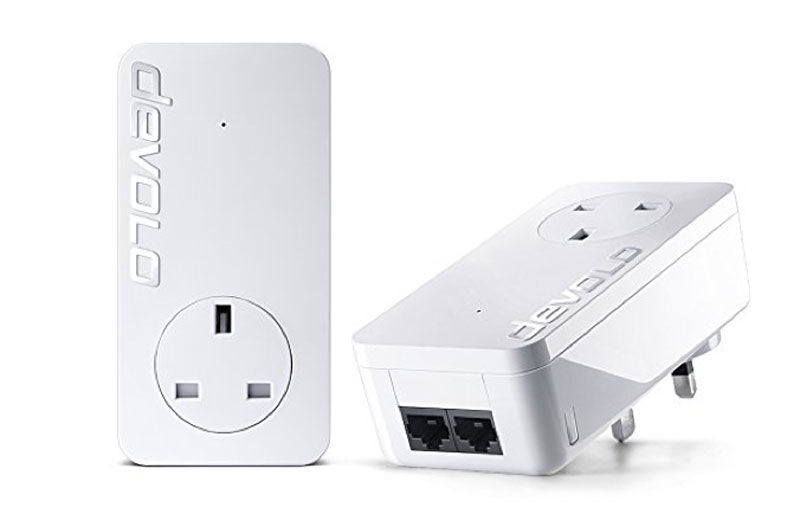 Just to increase your choices Devolo also offers the dLAN 550 duo+ Starter Kit (£69.99) that doesn’t offer the extra WiFi hotspot but does give you two 550 duo+ adapters with pass-through and double Ethernet ports.

Powerline don’t come bristling with features. They usually do one thing very well: speed up your home network.

But some, like the dLAN 550 WiFi and 550+ WiFi (as their names suggest) can create a new wireless hotspot in the second room so you can not only connect a smart TV, laptop or games console to the adapter via an Ethernet cable (supplied) but also improve Wi-Fi speeds for smartphones and tablets in often Wi-Fi-lacking parts of your house.

You can even “clone” this new, strong Wi-Fi signal to your existing Wi-Fi network so that it shares the same name and password.

In our real-world tests the 1200+ still came in faster, at 121Mbps but not twice as fast as the new 550, which scored a reasonable 81Mbps – not too shabby in comparison to its big brother.

Our real-world tests are conducted in a Victorian house, with the router on the second floor and the second Powerline adapter on the ground. All sorts of environmental factors can affect the speed, so you’ll get faster or slower results at different times of the day – sometimes not so far apart. And your house will undoubtedly differ from mine, but our tests suggest everyone will benefit from installing this Powerline adapter set.

In summary, for the very fastest speeds buy a 1,200Mbps Powerline adapter, but note that the medium-speed 500Mbps adapters still offer decent performance.

While the 1200+ scored 116Mbps on its new wireless hotspot, the 550+ managed just 61Mbps. We’ve seen better wireless speeds on Powerline units such as the Netgear Powerline WiFi 1000, although that lacks the pass-through and multiple Ethernet ports.

The dLAN 550+ WiFi Starter Kit has an RRP of £109.99. We think that extra tenner is worth it for the pass-through socket on the second adapter.

But if you want a new, powerful wireless hotspot to boost Wi-Fi speeds away from the router the 550 Wi-Fi will make more sense. There are, however, cheaper Wi-Fi Powerline adapters available; see the Best Powerline adapters roundup for more details.

While we find the dLAN 550 WiFi to be at the expensive end of the Powerline range it should be possible to find it cheaper online, so check below this review for the latest online prices.

From design and build, plus simple setup points of view the Devolo dLAN 550 WiFi and 550+ WiFi are extremely well-made Starter Kits. We just wish it was a little cheaper, and had two Ethernet ports on the second adapter.

The £99 dLAN 550 WiFi and £109 550+ WiFi add speed and range, plus a pass-through socket, to the older dLAN 500. In real-world tests they proved to be fast, and not so far off the top-of-the-range 1200+ model (£159). Adding a second Wi-Fi hotspot in your home is a welcome addition to the much faster wired speeds you’ll enjoy when downloading HD movies or playing games over the Internet. It isn’t at the cheap end of Powerline, though. If you can find it cheaper online, then it becomes a more compelling purchase. Also consider the less expensive £69 dLAN 550 duo+ Starter kit, which omits the extra Wi-Fi but boasts dual Ethernet ports and pass-through sockets on both adapters.