Samsung’s Galaxy A3 (2017) looks set to be a worthy follow up to its mid-range A3 from this year, and now the latest apparent leak seems to confirm the phone’s specs.

The handset has already been spotted on GFXBench a couple of months ago, with what looks like a 4.7-inch display, a 1.5GHz octa-core Qualcomm CPU, and 2GB of RAM.

On top of that, the phone looks to be packing 8GB of expandable flash memory, a 13MP rear-facing camera, and an 8MP front-facing shooter.

And now, the A3 has seemingly cropped up on a benchmarking site yet again, this time on GeekBench’s online database (via SamMobile). 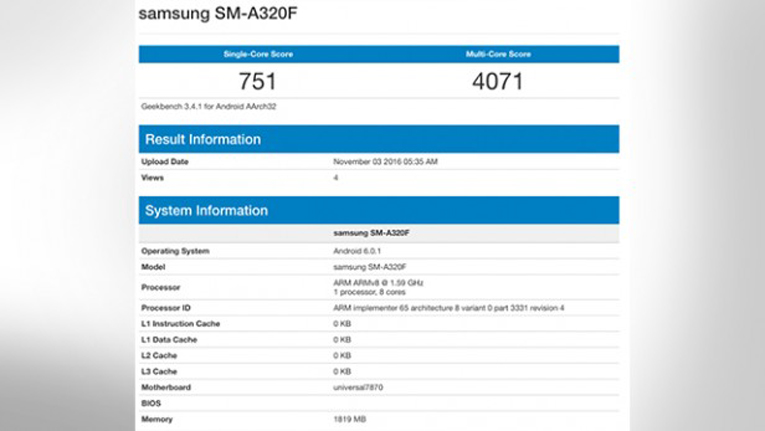 Unfortunately, there’s no new information contained in the listing, but it does seem to confirm the specs listed in the previous GFXBench.

Less than a week ago, the new generation A3 received Bluetooth certification, suggesting Samsung is in the final stages of preparing for a launch.

The current version of the A3 managed to impress us, not with its features but with its affordability, leading us to conclude: “While it may be a tad dull, for £210 the Galaxy A3 represents terrific value for money.”

We’re expecting something similar from the new handset, then, hopefully with a few more features included to make it a more attractive offering.

Samsung faces some stiff competition in the mid-range market, with the likes of OnePlus and Motorola providing some stellar offerings.

It looks like the last stop for the A3 before launch is the FCC in the states, so we’re expecting to hear a lot more soon.