WHAT IS THE LENOVO IDEACENTRE AIO 510S?

Apple has pretty much sewn up the good-looking all-in-one market with the iMac, but Lenovo wants in on the action with its IdeaCentre AIO 510S. Lenovo has certainly pulled out the design stops to a build gorgeous computer, although the choice of a low-power processor and relatively slow mechanical hard disk mean that this isn’t a PC built for speed.

Lenovo has done a great job with this all-in-one. The “S” in the model number stands for slim, and the AIO 510S doesn’t disappoint: it’s only 8mm thick at the top, but it’s a little thicker at the bottom where the components of the machine are kept.

With its super-thin bezels, the AIO 510S’s 23-inch screen looks smaller than it is – in a good way. This is definitely a computer that you’d be happy to have on display.

Lenovo has used metal-effect plastic for the case, with only the computer’s V-shaped stand made of metal. Done right, there’s nothing wrong with plastic, and the AIO 510S maintains a premium look and feel. It’s neat that the wireless keyboard and mouse match the style of the main PC, too.

Round the back of the PC are a Gigabit Ethernet port, HDMI input, headphone jack and two USB 3.0 ports, although one has already been taken by the keyboard and mouse’s wireless receiver. Why can’t manufacturers just use integrated Bluetooth?

Fortunately, there are two further USB 3.0 ports mounted either side of the webcam, which sits on the bottom of the display. If you don’t need these USB ports and want to hide the view from the webcam, the whole assembly slides up into the PC’s case. 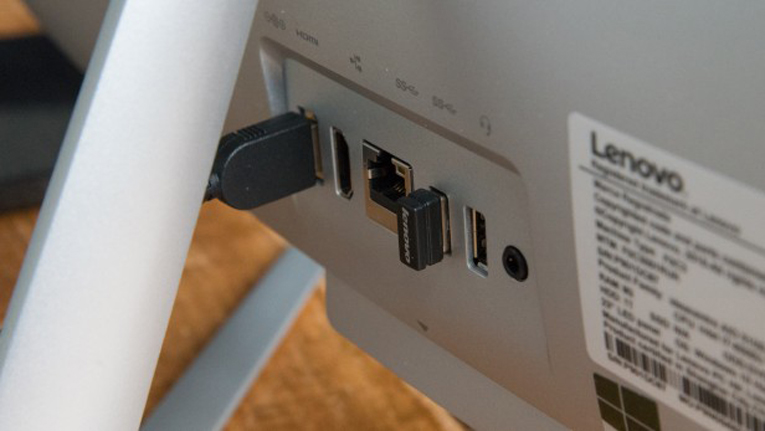 I’m not sure about the webcam’s placement, since it shoots rather unflatteringly upwards, giving whoever you’re talking to a nice shot of your nostrils. In my opinion a slightly thicker bezel at the top of the screen would have allowed room for better placement of the webcam.

Lenovo ships the PC with an slimline external DVD writer. This could be useful if you still use a lot of discs, although I’d take a slightly cheaper computer or an SD card slot and forgo this drive. 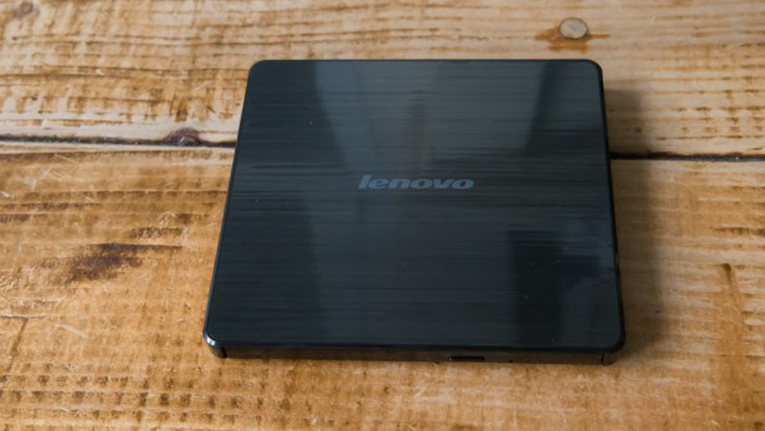 From a distance, lenovo’s bundled keyboard looks as though it’s been lifted from one of the company’s ThinkPad laptops.

In use, it isn’t quite as responsive as the best of Lenovo’s laptop keyboards, and its keys are a little soft. Once I’d become used to it, however, I found that I could type both fast and accurately. The half-width Enter key is more annoying, as I’d often hit the PgUp key by accident. 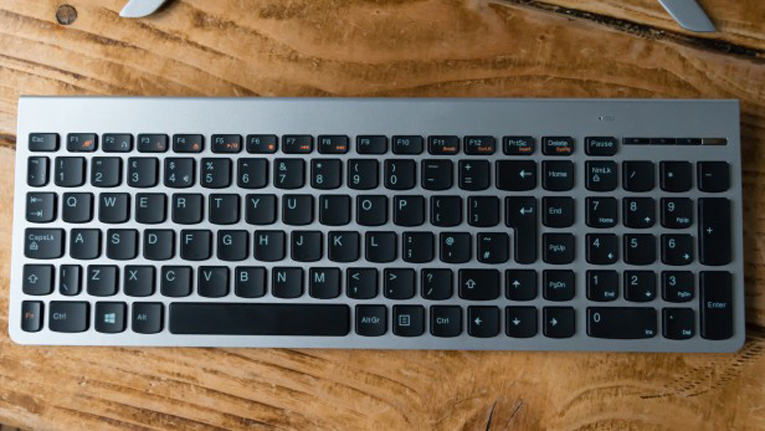 I’m not a huge fan of the mouse. It looks nice, but it has quite a severe hump in it, which made using it a little uncomfortable. To compensate, I’d find that I’d place my hand further back on the mouse’s body, which made reaching the buttons with my fingers tricky. 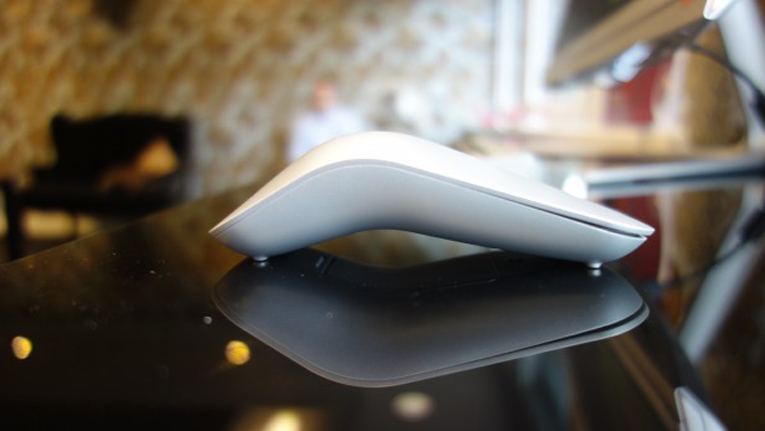 The 23in display is the highlight of this PC. Using a matte IPS panel, which benefits from little reflection, is a brilliant decision.

Excellent viewing angles enable you to sit practically anywhere, and image quality is top-notch. I measured the screen as capable of producing a solid 89.8% of the sRGB colour gamut, with a brightness of 274 nits, and decent contrast of 1,044:1.

It’s a touchscreen display, fully compatible with Windows 10. You might find this useful; personally, I don’t find reaching across a desk to use a touchscreen on an all-in-one particularly comfortable, preferring instead to use a keyboard and mouse. Still, since the touchscreen doesn’t affect image quality, I can’t complain about having an extra input option.

Lenovo has used Dolby Home Theatre technology to tune the stereo speakers, and the results are pretty good. Although there’s little bass, the volume is powerful, and sound is clean and distortion-free. I wouldn’t listen to a lot of music through these speakers, but for watching YouTube and Netflix, they’re fine.

As mentioned above, the webcam’s position isn’t ideal, shooting upwards and providing a great view of your nostrils. I also found that I had to move a fair way back from the camera to get my face in the shot.

Video quality is okay, but nothing to get too excited about. Anyone having a video chat will recognise you clearly, although fine detail tends to get smudged out. I was more impressed with the integrated microphone, which picked up my voice clearly, making it ideal for video calls. 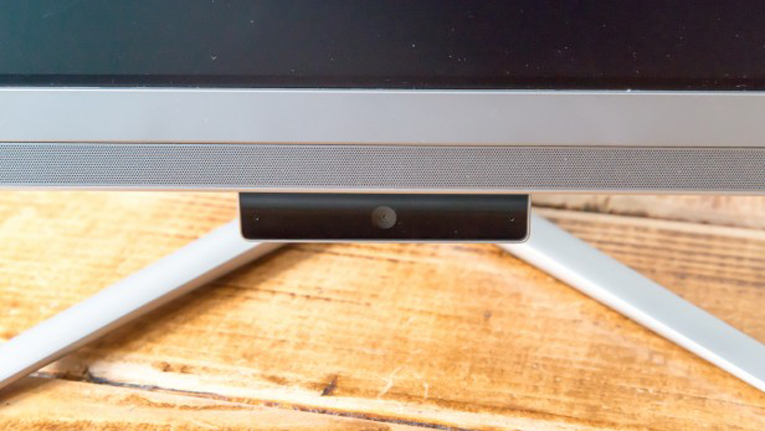 Lenovo has fitted a dual-core Intel Core i7-6500U inside this review model. It runs at 2.5GHz normally, although it can Turbo Boost to 3.1GHz. There’s 8GB of RAM, too. Since this is a chip that’s usually seen inside ultra-slim laptops, the AIO 510S doesn’t offer the same level of performance as other all-in-one computers, such as the iMac.

There’s enough power for all Windows tasks and some photo editing, but more intensive tasks, such as video editing will prove more difficult.

We’ve seen the HP Spectre 13 with this chip, although that laptop was around 8 to 14% faster in our qualitative 2D benchmarks: Geekbench and PCMark 8 Home. This is likely down to the Spectre offering better cooling, allowing the chip to boost for longer.

The AIO 510’s cooling fan is on all the time, which is surprising given the size of the chassis. It isn’t overly noisy, however; more of a constant hum than a disturbing whoosh.

What really holds the AIO 510S back is its 5,400rpm mechanical hard disk. Windows can take an age to boot, and it takes a long time to settle down when you hit the desktop; I had to wait a couple of minutes before the Start menu was searchable.

My hard disk tests showed the problem: the disk was only capable of producing sequential read and write speeds of 100.65MB/s and 96.97MB/s respectively. For a modern computer, I expect an SSD or at least a hybrid drive, particularly since the US version of this computer has an 8GB SSD cache. It’s a shame to have performance hampered by the choice of hard disk.

With an integrated Intel HD Graphics 520 GPU, you’re not going to be playing a lot of modern games on this computer, although it will handle older or lighter titles. Firing up Minecraft, for example, I managed to see consistent frame rates of around 60fps.

SHOULD I BUY THE LENOVO IDEACENTRE AIO 510S?

If you’re looking for a stylish all-in-one then there’s no doubt that the AIO 510S fits the bill. With its excellent display, this PC certainly ticks most boxes. However, it’s comparatively expensive, and the mechanical hard disk rather lets down the show, making the overall experience a bit of a mixed bag.

Slim, stylish and attractive, the Lenovo Ideacentre AIO 510S looks every inch the premium all-in-one – but the lack of flash storage can make it sluggish at times.