Moto G4 Play Set to Launch in India on September 6

Motorola has announced that the Moto G4 Play, a more basic variant of the Moto G4 and Moto G4 Plus that were launched in India this May, will be going on sale as an Amazon exclusive starting September 6. No pricing details accompanied the announcement, which comes in the form of Motorola India’s Twitter cover image.

To recall, the Moto G4 Play was unveiled just a day after its better-specced siblings were, and was listed in the US. Notably, the company still displays a ‘coming soon’ label on the US site. No pricing information has been provided, but a recent mention on import/export tracking website Zauba tipped an estimate of Rs. 8,999.

Here’s an idea of the Moto G4 Play’s specifications. The Android 6.0.1 Marshmallow-based Moto G4 Play comes with water repellent nano-coating, and is a single-SIM smartphone. It features a 5-inch HD (720×1280 pixels) display, and is powered by a 1.2GHz quad-core Qualcomm Snapdragon 410 SoC paired with 2GB of RAM.

The Moto G4 Play sports an 8-megapixel rear camera f/2.2 aperture and LED flash. The rear camera comes with features such as tap anywhere to capture, burst mode, auto HDR, panorama, drag to focus & exposure, and can record full-HD videos at 30 fps. There is a 5-megapixel front camera with display flash also on board. It bears 16GB of inbuilt storage and also supports expandable storage via microSD card (up to 128GB).

The Moto G4 Play comes with 4G LTE, Wi-Fi 802.11 b/g/n, Bluetooth 4.1, A-GPS, and Micro-USB connectivity options. It should be available in both its Black and White colour variants in India. It ships with 2800mAh battery and is claimed to offer full-day battery life. The smartphone is compatible with 10W rapid charger which is sold separately. 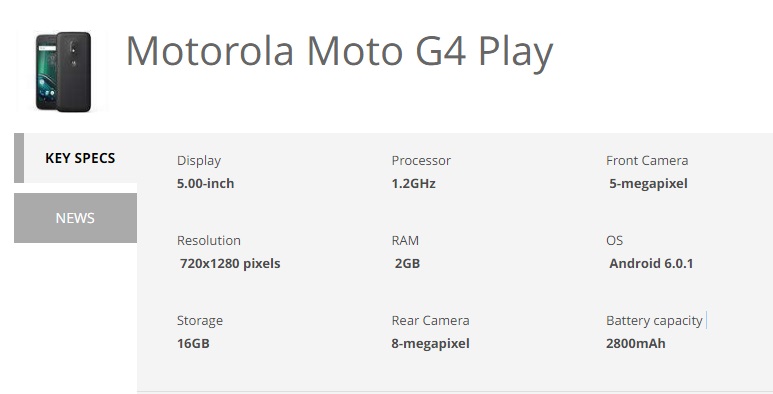