Pebble 2 review: Smart, but not fancy

Before the plethora of Android watches and, eventually, the Apple Watch hit the market, there was Pebble. It wasn’t the first ever smartwatch, but it was the first to excite the tech community with its ping-from-phone alerts and apps and was, for a while, the most successful Kickstarter project ever launched.

Since those early days we’ve seen several new versions, but none of those models was a true sequel to the original. Models like the Pebble Steel and the Pebble Time family were launched as more premium devices alongside the base plastic model.

Now, finally, we have the Pebble 2 and, at £100, it’s one of the most affordable smartwatches available. But is it any good, or is Pebble’s day done?

Just like the first Pebble, the Pebble 2 isn’t exactly an example of fine craftsmanship and elegance. But it is better looking than the first-generation model.

The case is still built almost exclusively from a lightweight and sturdy polycarbonate. It’s waterproof down to 30-metres, so you can take it swimming, or forget to take it off before hopping in the shower, and it’ll survive it just fine.

One improvement for the new model is that the standard three buttons on the right edge are sealed behind a single piece of resistant silicone, rather than by three individual hard buttons as before. The back button on the left sits behind a similar coating.

There are some rather unrefined elements of the design that raise more questions than answers though. There’s the glass surface above the display which protrudes from the rest of the case, instead of being flush with it. Likewise, the heart-rate monitor on the underside is built into its own tiny hump, which never fails to leave a square imprint in your skin.

It’s not uncomfortable to wear, though. Its light build and soft, flexible strap mean you barely notice that it’s on your arm. It does need to be worn fairly snugly for the heart-rate monitor to work, so it isn’t suitable for those who prefer a looser-fitting watch.

One of the added benefits of the Pebble 2 is its quick-release 22mm watch strap. It’s easy to take off, but more importantly it’s easy to find an alternative strap if you’re not besotted with the out-of-box offering.

In a world full of AMOLED touchscreens with bright colours and smooth animations, Pebble’s monochromatic square non-touch ePaper display looks decidedly old-fashioned. But it has its plus points.

While other smartwatch displays might be seen as miniaturised versions of what you see on a smartphone, the Pebble 2’s screen is more like a high-tech digital watch screen. 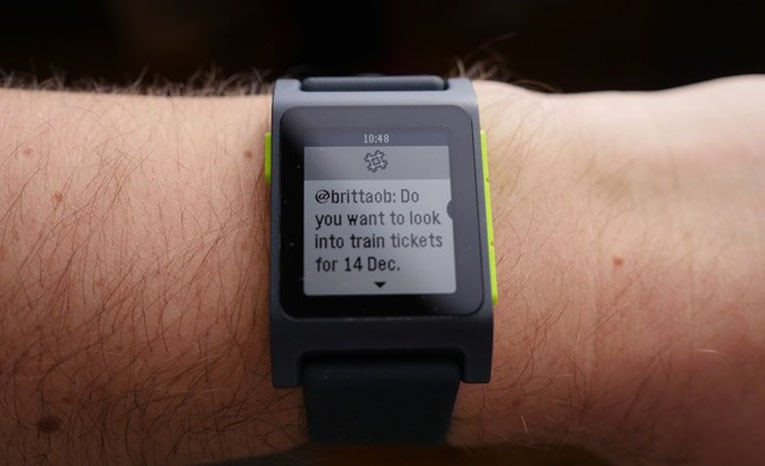 One of ePaper’s biggest benefits is that it can be on all the time without draining the battery to excess – unlike a colour display with ongoing refresh rate. ePaper doesn’t really consume any power when it’s not animated. And – depending on which watch face you choose – that means it only refreshes once a minute, or once a second.

Its other benefit is that it’s high contrast, which means you can see what’s on the display clearly from any angle. Providing you’re not sitting in a dark room. In those instances where you need a backlight, you can press the back button, which delivers a subtle blue backlight. Just like the digital watches of old.

Because of the way ePaper technology works, it’s actually easier to see the display in bright daylight, since it’s not reflective. So you can head out into sunlight without worrying about having to cover your watch screen to shade it when it gets bright outside.

At 114 x 168 pixels, it’s hardly the sharpest display around – but with the new and improved refresh rate this ePaper screen’s animations look quicker and snappier than before, more fluid than they did on older devices. But they’re nowhere near what a true high refresh rate colour screen is capable. And we can’t help but wish there was a splash of colour for this Pebble – it would liven things up no end, but would also mean an increase in price.

There are a few key elements of Pebble’s software that make it one of the best smartwatch OS’s around, and all of it controlled by four physical buttons. 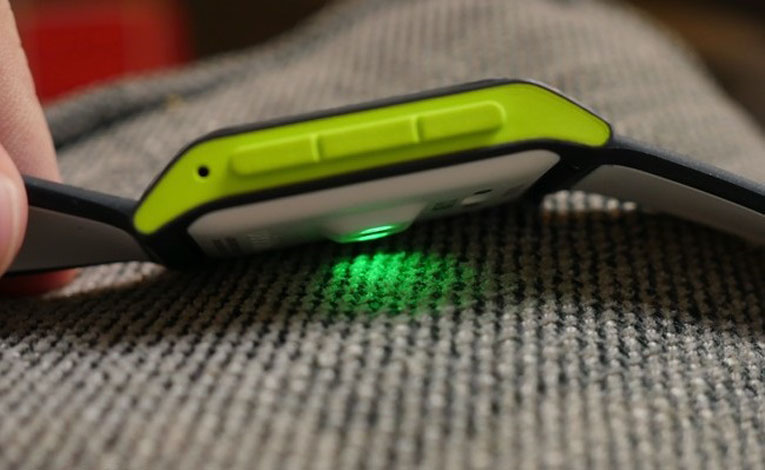 Getting to the main menu is as simple as pressing the middle button. Here you can scroll through your apps and get in to the settings menu.

Pressing the down button from the main watch face takes you to the timeline view – which was first launched on last year’s Pebble Time series. Here you get a quick glance at your upcoming calendar events and weather.

If you want you can assign quick launch functions to each of the four buttons. Long-pressing each of the four will could launch any apps you use frequently. This is particularly useful for functions like the Workout feature (that tracks your running or physical activities), or anything other app you like to use a lot.

When a notification does pop-up on the screen it fills the screen and can be dismissed. If you have anything on your timeline coming up it shows up in a small rectangular window at the bottom of the display. It doesn’t take over, or obscure the screen in the same way Android Wear pop-ups do, and – importantly – it doesn’t come back again once they’ve been dismissed.

In all, Pebble’s operating system is incredibly easy to navigate and uncomplicated, helped mostly by Pebble’s resistance to touchscreens. As smartwatch user interfaces go, there aren’t many that have the level of customisation or lack of clutter like Pebble’s. 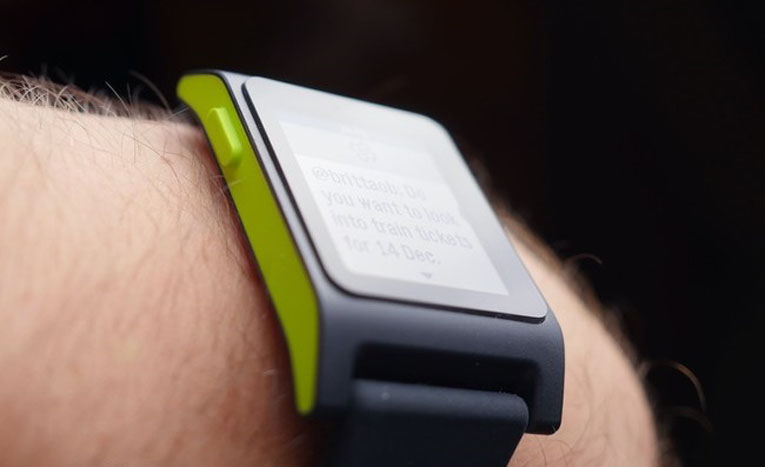 Part of the software experience, of course, is the smartphone app. There’s a version for both Android and iOS, with screens for health and activity tracking, customising and adding watch faces, downloading, customising and installing apps, and a screen for switching off notifications for individual apps. This level of control means you never get a wrist alert for anything you don’t want to see (after some initial tinkering).

Zipping in and out of options and menus is pretty fast and delay-free on the Pebble 2. But installing new apps, setting new watch faces or customising them can take time – mostly because there’s very little storage space on the watch. There’s a grand total of 8MB of space, so you can’t store music, even if you can control any music app currently playing on your phone.

One of Pebble’s new arsenal of features is the voice action tool. With this you can reply to messages on WhatsApp, Facebook Messenger, Hangouts or SMS by just speaking into the built-in microphone. 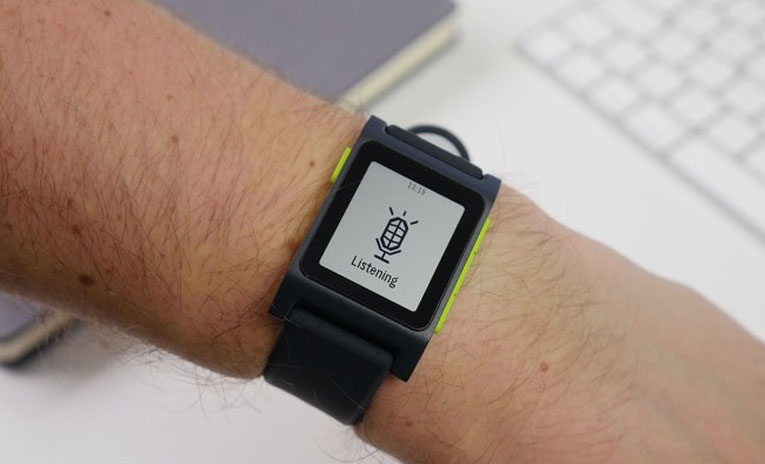 Sadly, in this instance, you’re hard-done by if you have an iPhone: it’s a feature that only works with Android phones, and works well generally, if you have clear speech. It sometimes mistakes similar sounding words, but works pretty much as well as any other dictation available.

As fitness trackers go, the Pebble 2 works just as well as most sub-£100 trackers we’ve ever tested.

Even without built-in GPS, the Pebble has accurately tracked our various three 3-5k runs to within 100 meters. That’s pretty impressive for a device which doesn’t use any location tracking hardware or software. Likewise, its heart-rate monitor does a good job of measuring reliably and consistently. 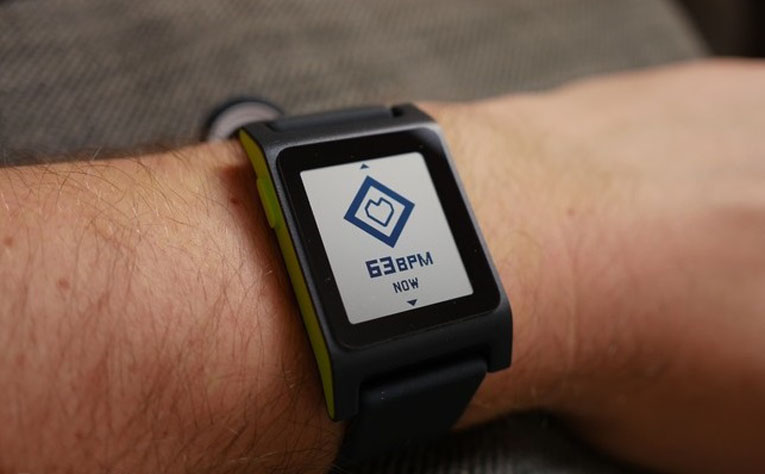 The one area that needs work is the sleep-tracking technology. Some nights it accurately tracks sleep awake time and can split between light and heavy sleep. Other nights, it showed bizarre results, like waking up in the middle of the night for an hour, then going back to sleep again – despite the reality of a long, uninterrupted sleep.

The fitness-tracking feature’s biggest issue isn’t the hardware capability, but what Pebble’s health feature does with the information. Or rather, that it doesn’t really do anything with it, except show it in a chart and show you averages for each day of the week. It doesn’t tell you what you need to do to improve, or help in anyway. It’s just data collecting.

Thankfully, you can opt to have Pebble hook-up with your Up or Misfit accounts to get a better handle on your fitness and health regime, with much better actionable information.

One of the main benefits of Pebble – and one that’s existed ever since its first generation – is its battery life. While most other smartwatches barely make it to the end of one or two days, the Pebble 2 can make it through an entire week on a single charge. 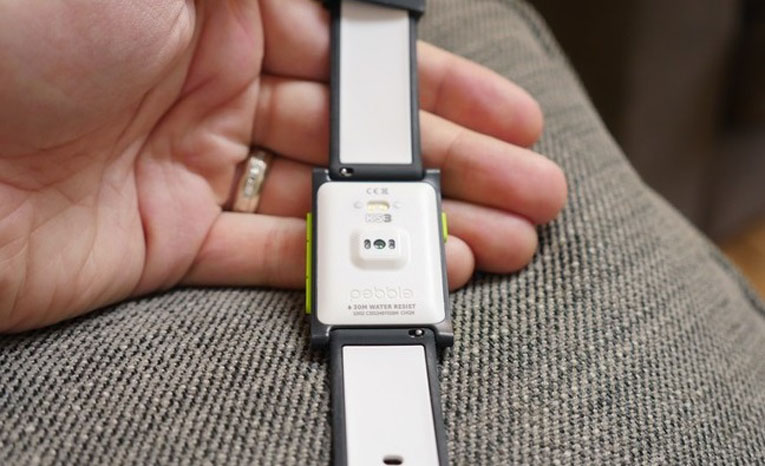 Even after tracking several running sessions, constantly tracking heart-rate and sleep tracking through the night (as well as all the usual notification mirroring), the Pebble took five full days to get down to 20 per cent capacity in our use.

That kind of battery performance offers incredible peace of mind. It means you don’t have to take another charging cable with you when you go away for a long weekend, or even if you’re away for a full week. It means one less power outlet or USB port being used frequently.

For a £100 device, the Pebble 2 has a lot going for it. It’s truly cross-platform so that you can use it with an Android phone or iPhone. It has amazing battery life and a user interface that’s very simple to use and understand.

The lack of a colour screen, on-board GPS tracking and its less-than-wonderful hardware design are all downers, sure, but the Pebble 2 is still great value for money – even if it can’t impress the eyes as much as some better finished and higher-end competition.

Notably it even has some of the features seen on popular high-end fitness trackers – such as a heart-rate monitor – most of which cost even more than a Pebble 2. Think of it in that way and the Pebble 2, with few notifications synched to your phone, could be an ideal tracker purchase.

Overall, at this price point you’ll be hard-pressed to find anything as feature-rich and reliable as the Pebble 2. That’s why, in our view, Pebble hasn’t yet had its day.