WHAT IS THE PHILIPS FIDELIO E6?

Brilliant though they are, surround sound systems can be somewhat of a pain to install. Making space, mounting them, concealing the cables, getting permission in the first place… All these things are designed to test the very limits of your patience and domestic bliss.

But Philips didn’t get the memo. Its new Fidelio E6 wireless speaker system brings you a full 5.1 setup without any of the hassle or arguments that occur with a traditional surround-sound setup.

How is this possible? The E6 uses something called Surround on Demand, a pair of detachable rear speakers that can be docked on top of the front speakers when not in use. And that’s not all – a wireless subwoofer delivers deep bass without adding to the clutter, while the sockets, amplifiers and streaming functionality are hidden in one of the front speakers. It’s the successor to the Fidelio E5, launched in 2014. 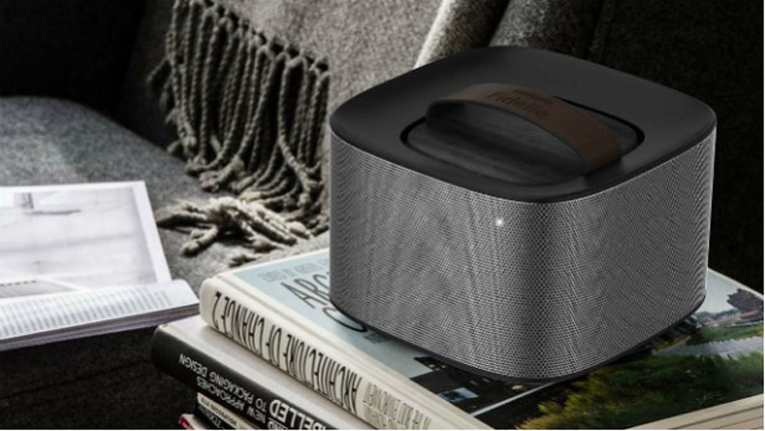 Like its predecessor, the Fidelio E6 is a visual treat. The two front speakers are wrapped in a fetching grey cloth with curved corners and a discreet badge on the front. At 302mm high by 161mm deep, they’re fairly big and require more elbow room than a soundbar or soundbase – I placed them on a pair of speaker stands either side of the TV, which looked the business.

The right speaker has an LED display that shines through the front cloth. It displays the selected input and volume levels in clear, bright digits. You can dim it using a button on the remote, or choose to make it disappear when idle. A small LED to the right blinks to denote the system’s status. On the side is a control strip that houses power, Bluetooth, input and volume keys, plus the NFC touch point. 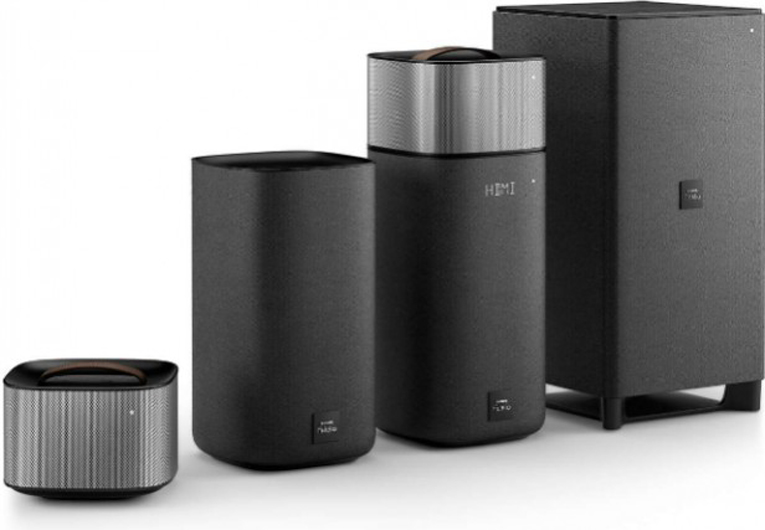 The right speaker’s rear panel offers a surprisingly generous range of sockets given the limited space on offer. You’ll find two HDMI 1.4 inputs and one ARC output, plus optical, coaxial and 3.5mm inputs, Ethernet and a USB port.

The only downside of this decent selection is the outdated HDMI spec – the lack of HDMI 2.0 ports means there’s no support for 4K/60p, HDR or HDCP 2.2 from Ultra HD Blu-ray decks (although you could feed audio to the E6 separately using the player’s audio-only HDMI output). At this price, it isn’t unreasonable to expect the very latest spec.

Meanwhile, the left speaker receives the mains power and connects to the right speaker using the supplied DIN cable.

The battery-powered surround speakers are well made and attractively styled. The concaved top panel features a faux wood panel and a leather carry handle to lug it around. They nestle snugly on top of the speakers and charge when docked. Each one features an independent Bluetooth module and can be used as individual portable speakers or a stereo pair.

On the back of each surround is a small control panel that includes power, Bluetooth and Surround on Demand pairing buttons, with a status LED in the middle of each one. Another small LED on the front tells you when the speaker is activated.

Moving to the subwoofer, its tall, slender cabinet mimics the satellites’ shape and styling, keeping everything visually cohesive. Like all the speakers, build quality is superb and its upright design keeps its footprint small.

The front satellites feature a 19mm soft dome tweeter and two 3-inch full-range woofers. The surrounds are equipped with a single 2.5-inch woofer each, while the sub packs a single 6.5-inch woofer. Power output from the six built-in amplifiers is quoted at 270W – that’s 90W for the sub and 180W for the satellites. 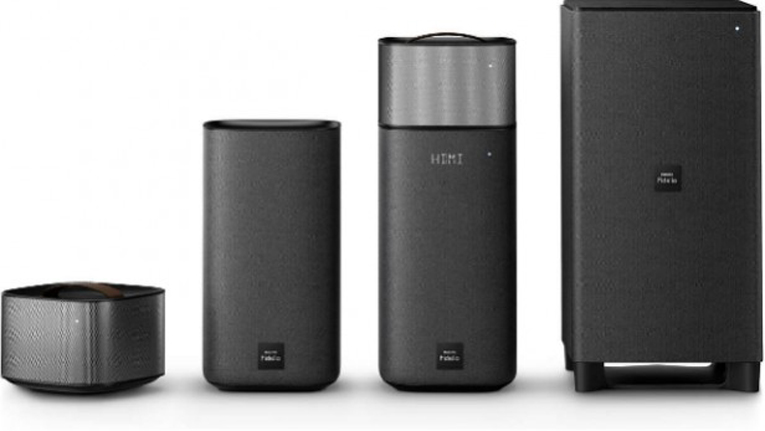 The more mathematically minded among you will have noticed that the E6 claims to be a 5.1 system but there are only four main speakers and a sub. A dedicated centre channel is created by the front speakers, which anchor speech to the centre of the screen.

There’s built-in Dolby Digital and DTS decoding, plus Dolby Pro Logic II for expanding stereo sources to pseudo 5.1. There are self-explanatory Movie, Music and Night modes, plus Auto Volume Leveller, Voice and Smart Sound. You can manually tweak the treble and bass levels and set an audio delay to correct lip-sync issues.

Connect the E6 to your network via Wi-Fi or Ethernet and you can stream music via Spotify Connect (with a Premium subscription), Deezer, TuneIn radio and Google Play Music. It also supports Google Cast, allowing you to stream audio from compatible smartphone apps.

These can be accessed through Philips’ snappily titled HCWeSet app for iOS and Android. You have to download this to setup the E6 on your network, but afterwards you can stream music directly from the respective music apps.

It’s a slick and attractive app – but sadly, it doesn’t allow you to stream music from PCs and NAS drives. For that you’ll need to download a third-party app such as BubbleUPnP. If you’d rather avoid the hassle of network setup entirely then you can use the built-in Bluetooth instead.

It comes as no surprise that the E6 is easy to setup; you’ll have it up and running in minutes. The biggest challenge is cable management. With a long DIN lead plus HDMI, optical and power cables running into the back of the speakers, it can get a little untidy.

Unusually, the E6 is equipped with a Spatial Calibration system to ensure the best sonic balance wherever you place the speakers. It uses a series of test tones to determine the optimum levels for your layout.

Detach the surround speakers and it switches into surround mode – they’re paired at the factory so you don’t need to do anything. Similarly, the subwoofer doesn’t require pairing, although it kept shutting down in Music mode for no apparent reason, so I had to keep switching to Movie mode to wake it up.

Network setup using the HCWeSet app is easy in principle, but I had to perform a factory reset first to connect the E6 to my router – you shouldn’t have such trouble with a new unit. The app is nicely designed, but without any built-in media players you probably won’t use it after installation.

Philips has always had a knack for designing user-friendly remotes and the E6’s zapper is no exception. Its firm rubber keys, thoughtful layout and clear labelling make operation easy. It covers all bases, with dedicated buttons for bass, treble and surround speaker volume, plus Bluetooth playback keys.

Like its predecessor, the Fidelio E6 is an impressive performer. It serves up a rich, room-filling sound with plenty of bass and smooth, expressive high frequencies. It goes satisfyingly loud, even with the volume just over half way.

Play Star Wars: The Force Awakens via HDMI and the opening invasion of Jakku is an absolute blast. The subwoofer emits a weighty rumble as the spacecraft looms overhead, and when the Stormtroopers start shooting up the village, their blaster shots have a tight, solid thud.

The subwoofer’s performance is one of the system’s key assets, gelling everything together without overpowering the other speakers. 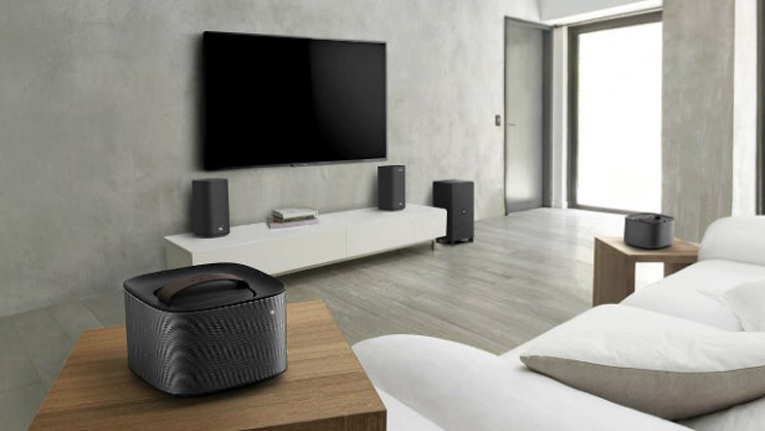 As the raid continues, the E6 conducts the action with aplomb. Gunshots, explosions, roaring flamethrowers, panicked voices – all conveyed clearly and robustly. Meanwhile, the clear and silky brass notes of John Williams’ soundtrack soar over the action, hinting at the system’s refined, musical nature.

The Philips’ sonic character is easy and even-handed, which means you can happily crank up the volume without damaging your eardrums. A little more bite wouldn’t go amiss, just to raise the excitement levels slightly, but overall the E6s presentation is easy to like.

There’s plenty of detail too, from the gentle crackle of fire in the background as Kylo Ren squares up to Lor San Tekka, to the gentle rustle as Rey scavenges inside the Star Destroyer. These subtle textures draw you into the scene.

The Philips’ stout mid-range blends seamlessly with the subwoofer, resulting in a full, cohesive sound. Dialogue reproduction is excellent, too – the front speakers do a terrific job of projecting speech towards the screen while keeping it clear and focused. The soft dome tweeters pick out the nuances in every voice, from Kylo Ren’s mechanised distortion to Han Solo’s gruff tones.

Of course, the E6’s secret weapon is Surround on Demand, and it works well – although there’s room for improvement sonically.

The surrounds deliver rear effects with enthusiasm and accuracy, easily enhancing your involvement in the movie, but their sound is thin and contained. They lack finesse and mid-range authority; a tonal shift that can be jarring when effects move from front to back.

What’s more, their narrow dispersion means you don’t get the diffuse, borderless rear stage that you do from some surround speakers. Their limitations are even more apparent when you play music through them – there’s practically no bass whatsoever, vocals are tinny, and snare drums are hard and spitty.

But provided you don’t analyse it too closely, the surround speakers are a lot of fun. They come into their own when Rey and Finn take off in the Millennium Falcon to evade the Tie Fighters. Roaring engines and rattling gunshots sweep between the back channels as the fighters zoom across the expansive soundstage – their movement is fast and well-defined. And when we step into Maz Kanata’s castle, the chatter of the gathered alien creatures surrounds you; small noises and voices peep out from every channel.

Stereo TV material gets a boost too – the plinky sound of the descending tower in Pointless emanates from behind you, while Westworld’s gun battles have an engaging omni-directional presence.

Play some tunes via Bluetooth or CD and the front speakers treat you to a lush and engaging musical performance. With “Native Land” by King, the subwoofer adds plenty of warmth to the synth bassline, while the satellites’ solid mid-range and refined highs lend body and air to the dreamy electronic arrangement. I really enjoyed revisiting my favourite albums through the E6; you will too.

SHOULD I BUY THE PHILIPS FIDELIO E6?

With its detachable rear speakers and wireless subwoofer, the Fidelio E6 is the perfect home cinema system for anyone who hates clutter. Surround on Demand is a great idea that’s well realised, bringing you proper 5.1 sound without having to install permanent rear speakers. Its smooth, room-filling sound, generous features and attractive design help justify the hefty price tag.

But before you crack out the credit card, there are a few caveats. The surrounds’ thin, compressed sound harms soundstage cohesion and might put you off using them as Bluetooth speakers. You can’t pass through full-fat UHD Blu-ray signals, and the smartphone app is pretty useless post-installation.

However, these flaws don’t mask what is essentially a very impressive 5.1 system that integrates neatly into any living room.

Philips’ ingenious surround system cuts down on clutter while delivering huge movie sound – but there’s room for improvement in places.