The TS-251A is a high-end two-bay NAS, with a slew of features to make accessing your files easier, no matter where they’re stored. The USB QuickAccess port is particularly innovative, since it means you can access your NAS’s files, and even its configuration interface and installed apps, over USB when there’s no network available.

The TS-251A is a standard-looking white NAS box, enlivened by a translucent green stripe on the front containing an SD card slot, the USB 3 QuickAccess port, another USB 3 port for storage, as well as power and one-touch copy buttons. 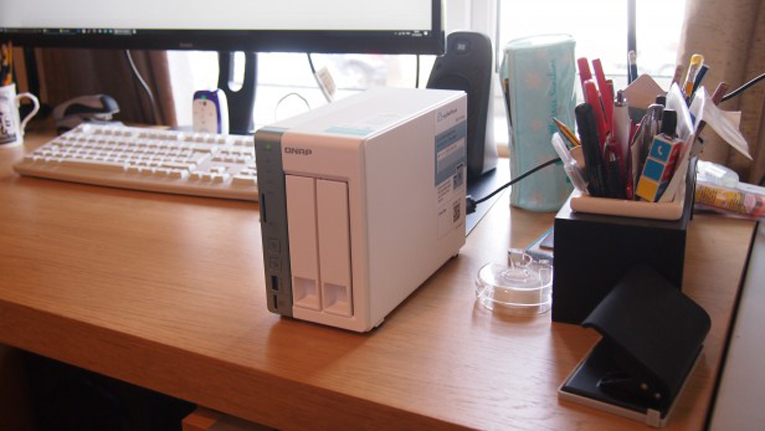 It’s quite the contrast from the WD My Cloud EX2 Ultra, which doesn’t even offer a power button. On the rear you have two more USB 3 ports, two Gigabit Ethernet ports, an HDMI output and headphone and microphone sockets.

QNAP hasn’t worked as hard as Synology to make fitting the NAS’s hard disks as painless as possible – you’ll still need a screwdriver – but it’s still a three-minute job.

I fitted two 4TB WD Red disks, which is a combination that would cost you around £300 on top of the cost of the NAS. I’d always recommend setting a NAS to RAID1, so data is mirrored across both drives, but this means you’ll lose the capacity of one disk.

There are three ways to get the NAS’s QTS operating system installed. You can plug it into your network or over USB, and use the Qfinder Pro application to find the NAS and run the setup wizard. 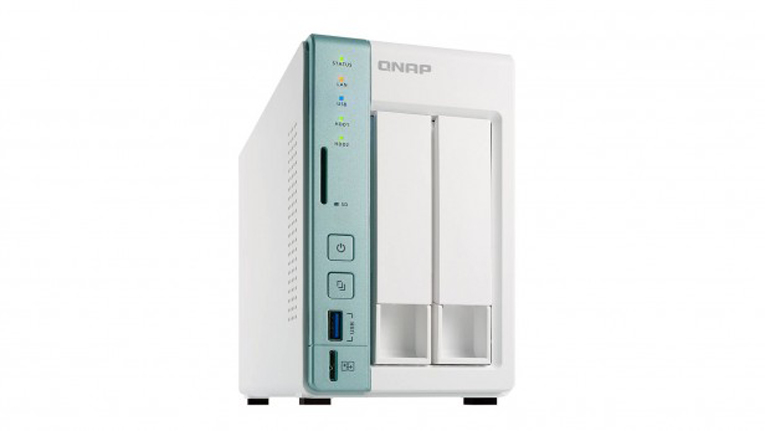 You can also try to install the QTS OS over the internet, by putting the “Cloud Key” written on the side of the NAS into install.qnap.com. This found the NAS and started the setup program, but the setup crashed half way through and wouldn’t let me restart. The Qfinder method is simpler and better.

The setup wizard takes you through setting up a myQNAPcloud ID to access the NAS over the internet, choosing if the NAS is for home or business use – this affects which apps and services will be installed by default – and setting the disk configuration.

This defaults to the disk-break-proof RAID1, which I like to see, and provides a neat explanation of what RAID0, 1 and JBOD (Just a Bunch Of Disks) mean. It becomes a little confusing when it asks you to select between Static, Thick and Thin volumes (and QNAP’s own documentation doesn’t really help).

Apparently, Thick and Thin volumes turn your physical hard disks into a storage pool, and you can have multiple storage volumes within the pool (compared to a single volume for Static). This means you could have your shared data on one volume and use the rest of your storage for recording CCTV images.

I still couldn’t fathom the difference between Thick and Thin, and apparently storage pools have a performance impact, so most home users are better off selecting a Static volume.

After the mild disk setup confusion, things get much easier. The QTS operating system is up there with Synology’s DSM for being good-looking and easy to use. It’s icon and window-driven, with icons for any installed apps spread across various homescreens, similar to a phone or tablet. 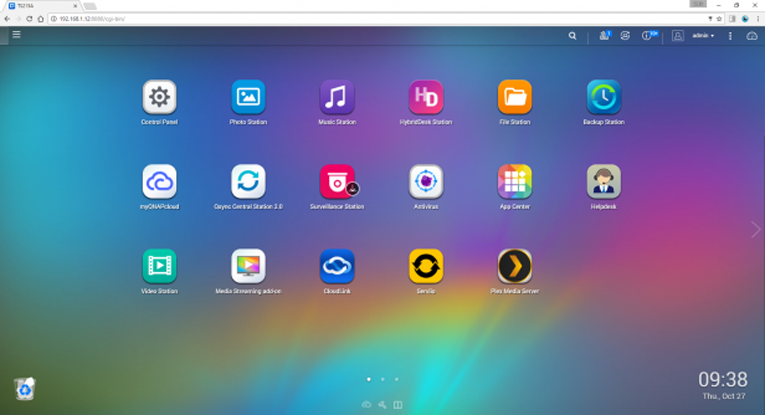 Users are easy to create in the Control Panel, and setting permissions is a case of ticking boxes to assign read-only, read/write and deny access permissions for each network share you’ve created. Likewise, you can create a new share and assign permissions in only a couple of clicks.

It’s also easy to set up media sharing. Go into the Shared Folders settings page and open one of your shares, then tick the Media Folder button. Anything in that share and its sub-folders will now show up in the Photo, Music and Video Station apps. 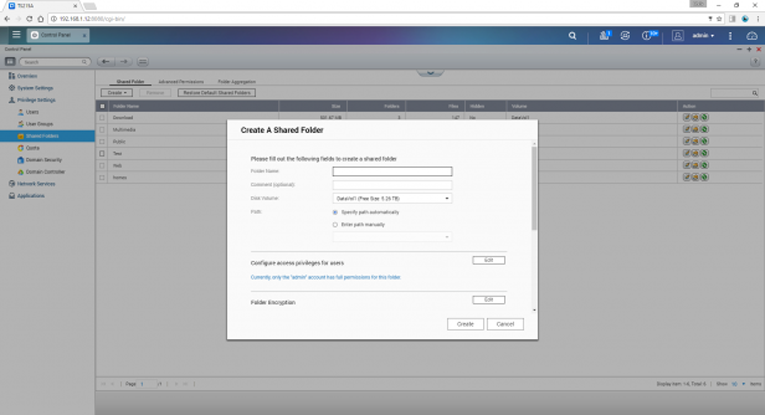 I’m surprised by how excited I was about a simple micro-B USB 3 port on the front of a NAS, but it’s amazing how useful it is. When you use this port to plug the TS-251A into your Mac, Windows 8 or 10 PC (Windows 7 needs drivers from QNAP), you can immediately access your network shares and the NAS’s interface and applications, as if you’d plugged the NAS into your network.

It’s incredibly useful during setup, and if – for whatever reason – it isn’t possible to get your NAS and PC on the same network, you can still get at your files. It’s like turning the NAS into an external hard disk, but you still maintain the security of needing a username and password to access shared folders.

The pre-installed media apps mainly work well. When viewed through the web interface, Music Station provides a clear view of your tunes, as well as the ability to stream them to any UPnP devices on your network. 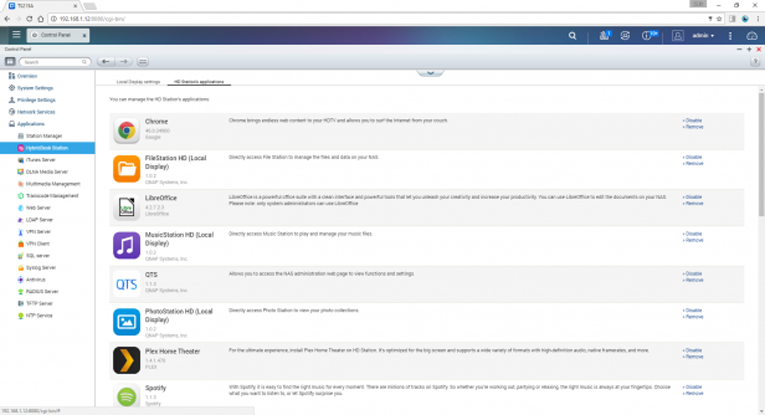 You can also output audio directly through the NAS’s HDMI port or 3.5mm jack socket – useful if you just want to plug some speakers straight into the NAS and use it as a remote-controlled media receiver. Photo Station works well, and I liked its clean design and pleasing fade design as you flick through your pictures.

I was less enamoured with Video Station, which can transcode videos into MP4 format at various resolutions in order to play them back over your network. It’s easy to use, and far less confusing than Synology’s Video Station app, but the transcoded video was choppy and poor quality, even after I’d installed the necessary add-ons to enable hardware transcoding. I had much better results just opening any video files in VLC direct from a Windows network share. 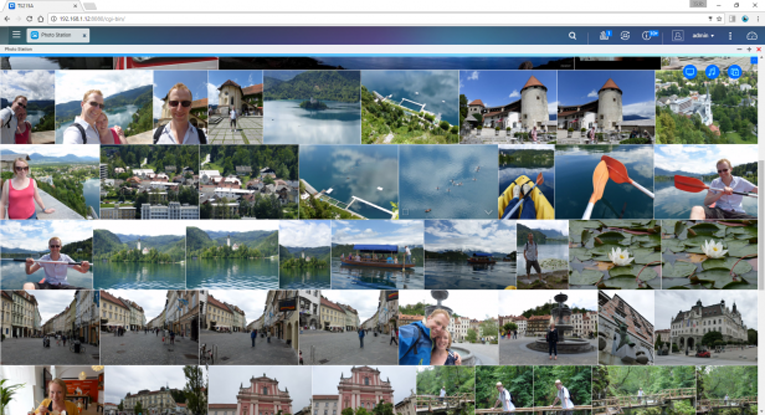 There are plenty of other apps to try in the App Center, from backup to e-commerce to content management and mail servers – it’s a very developed ecosystem, on a par with Synology’s. There’s also a separate set of apps in the HybridDesk Station section. These are designed for when your NAS is plugged into a keyboard and mouse and a monitor over HDMI. 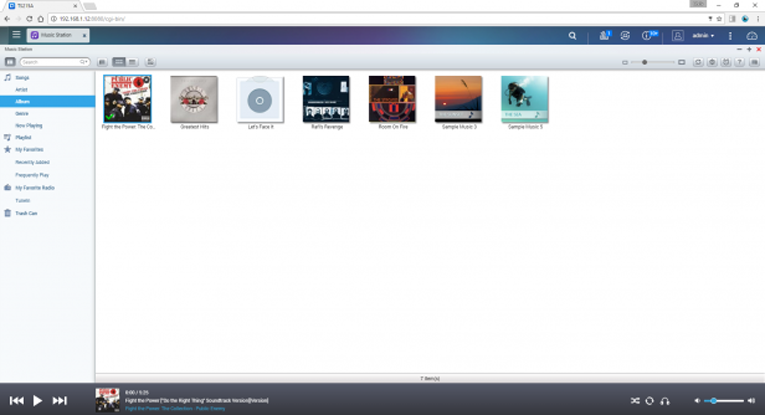 I found the Chrome browser and LibreOffice worked perfectly well, but was disappointed with the lack of a media player. Previous QNAP NAS devices I’ve used have had a dedicated QNAP media player app as well as the Kodi media center, but these weren’t available.

There are several QNAP apps available for iOS and Android – I tested the Android versions. Qmanager lets you see the status of the NAS (disk space used, CPU usage, created users and installed apps) and is useful for powering down the NAS. Qget makes it easy to set up HTTP and BitTorrent downloads, but was prone to crashing.

Qphoto is a perfectly good interface for viewing your photos, and can fling pictures to UPnP receivers such as Kodi and some smart TVs. Qmusic is competent, but I found Qvideo displayed the same poor streamed video quality as the desktop app, and I had better results using BubbleUPnP to stream video from the NAS instead.

Like every NAS I’ve seen recently, the TS-251A prioritises making it easy to access your files from outside your network. To set up myQNAPcloud, you just need a username and password. You’re then given a custom “.myqnapcloud.com” URL to access your files.

You can also go to www.myqnapcloud.com and log in. This is fortunate, since the web address I chose refused to work for me.

However, once I’d logged in at the main myQNAPcloud site I was rewarded with a slick interface that lets you upload, download and manage your files, as well as play back your music collection. It’s like a personal Dropbox – but one that’s limited by the slow upload speeds of most home broadband connections.

These are similar speeds to those we saw from the fast Synology DS216 – you won’t have to worry about file-transfer speeds with this NAS.

The QNAP TS-251A is expensive, but it’s fast and absolutely packed with features. The operating system is easy to use, there are plenty of extra apps to install, and it’s useful to be able to access the NAS with a virtual network over USB. However, the mobile apps don’t feel as refined as those available from Synology, and I wish the HybridDesk Station media center apps would make a reappearance.

It’s a shame the TS-251A is around £60 more than the Synology DS216, and if they were a similar price the DS216 would have a serious fight on its hands. As it is, both devices offer excellent operating systems, fast file transfers, and plenty of third-party apps to make them yet more powerful.

The TS-251A has a couple of extra features, such as audio and video outputs, as well as the useful USB QuickAccess port, but you’ll need to think carefully about how you use your NAS to see if these matter to you.

A quick and highly specified NAS, but whether it’s worth the premium over the competition will depend on your specific needs.