An excellent low-cost handset from Samsung, but the Galaxy J3 is outdone by its sibling – the even better Galaxy J5

With the number of different smartphone models Samsung kicks out every year, it’s a surprise it isn’t more successful with its budget models. However, this is a market it’s had trouble cracking, with its budget offerings lagging a long way behind the Motorola Moto G.

As you’d expect of Samsung, though, it’s giving it’s all in an attempt to elbow its competitors aside, and the Samsung Galaxy J3 looks to be a strong contender for the crown of budget smartphone king. It’s a £150, 5in Android smartphone equipped with what looks like a killer specification. It’s only £10 cheaper than the Galaxy J5, though — another impressive budget handset from the South Korean manufacturer — so is it worth saving the money?

At first glance, the J3 looks similar to the J5. The J3 is a touch more compact, perhaps, but with a difference in screen size of a mere 0.2in, it’s not a night and day difference. 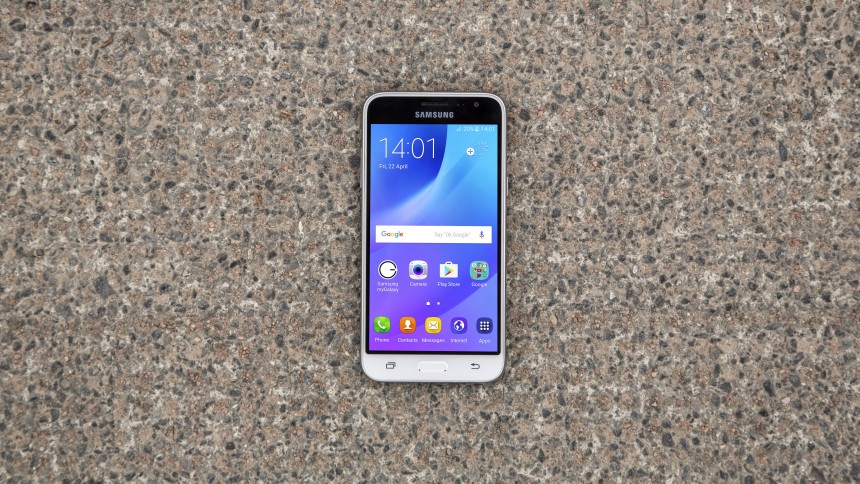 The construction of the two phones isn’t terribly different, either. Both are finished in bland, matte plastic all over, but both feel staidly solid at the same time. The case doesn’t bend or creak unduly and its buttons all depress with a good, solid click. Despite its budget appearance, the Galaxy J3 is a robust-feeling smartphone.

I’m not a huge fan of the two-tone black-and-white front panel of our review sample, but it is possible to grab the phone in all-black if you want. Generally, it’s pretty inoffensive, although I have to say I prefer the look of the Motorola Moto G (3rd gen) and Motorola Moto G4. 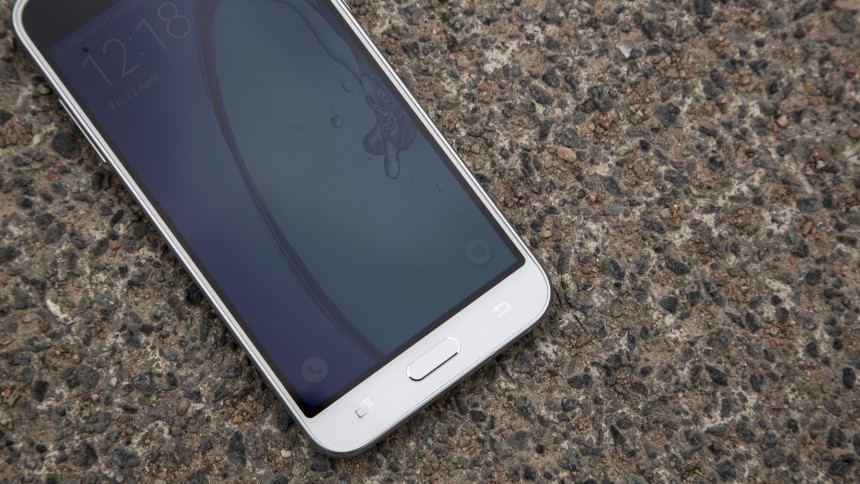 Where the appearance and build is run of the mill, however, the J3’s display is anything but. Just like the Galaxy J5, it uses an AMOLED panel – a real rarity in this price bracket. This brings with it a sharp 720p resolution and a vibrancy and colour-packed image that most budget handsets can’t get near, with its perfect, inky black level ensuring images look incredibly punchy solid.

OLED displays have a tendency to look a little dull — it’s their one major weakness — but not here. I recorded maximum brightness of 447cd/m2, which means it’s readable in the brightest sunshine. Note, however, that you’ll need to enable the phone’s auto-brightness mode for it to hit these heights. In manual mode, the screen peaks at a much lower 318cd/m2.

So far, so good, but it’s only when you examine the specifications of the Samsung Galaxy J3 and J5 side by side that you notice where the two diverge. Where the J5 uses a Qualcomm Snapdragon 410 chipset and 1.5GB of RAM, the J3 employs a Spreadtrum SC8830 chipset.

The difference in straight CPU performance isn’t all that great between the two. In Geekbench 3, the J5 is ahead, as is the Motorola Moto G 3, but not by the sort of margin that would make a big difference to the day-to-day feel of the phone.

he same holds true of the phone’s graphics capabilities. Where the J5 has an Adreno 306 GPU, the J3 is equipped with an ARM Mali-400 MP2, and the differences between them are similar. With no support for OpenGL ES 3 or above, the Mali-400 chip won’t run our usual GFXBench 3 Manhattan test, so the below results come from the less demanding GFXBench T-Rex test.

It doesn’t initially look good for the J3, but for the most part, it won’t be a huge problem. Sure, demanding games such as Asphalt 8 and Riptide GP 2 won’t run smoothly with the maximum-quality settings enabled, but most casual, strategy and puzzle games will run without issue. And, where it matters, the phone is reasonably responsive. There’s no noticeable typing lag when using the onscreen keyboard, and swiping between screens is snappy and smooth.

Battery life isn’t half bad, either. In our video-rundown test, which we run with the screen set to a brightness of 170cd/m2, the Galaxy J3’s 2,600mAh battery helped it last 13hrs 15mins. It lags behind its stablemate, but that’s no big problem. Anything above 13 hours in this test is pretty good, and translated to real-world use, the J3 will comfortably last you a day of use, maybe even a day and a half if you’re careful.

The Galaxy J3 has an 8-megapixel camera at the rear and a 5-megapixel front-facing snapper facing forwards, and it looks pretty standard. There’s no fancy autofocus mechanism, nor optical image stabilisation, but quality is fine for a phone at this price. It won’t be able to match the slightly pricier J5 for detail capture, however, as that phone has a higher-resolution 13-megapixel camera. 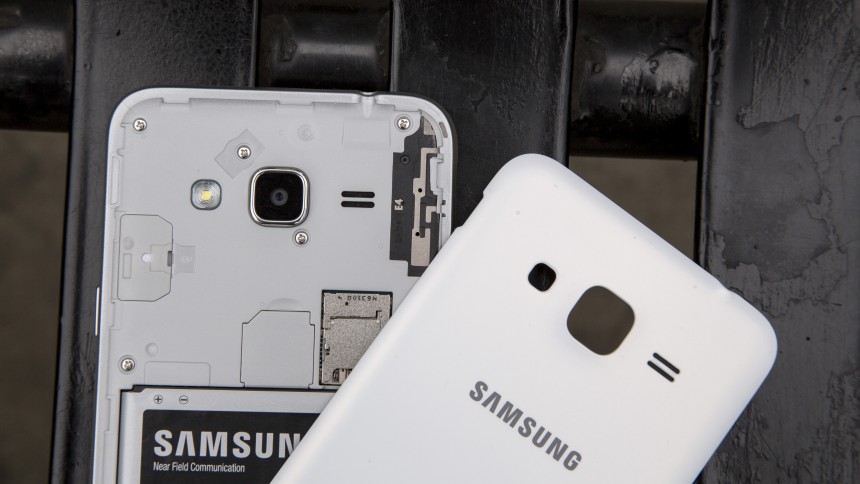 Either way, the camera is pretty much par for the course as far as quality goes. It’s a decent performer, both indoors and outdoors. However, it’s held back, as the Samsung Galaxy J5 was, by a propensity to overexpose highlights when faced with scenes containing lots of light and shadow detail.

Enabling HDR fixes this problem, but this slows the processing of images down by a couple of seconds, and it can’t fix the fact that the J3’s images get very noisy and fuzzy in anything but good light. It’s also rather slow to focus generally, and I found it somewhat disappointing that video capture only goes as far as 720p. 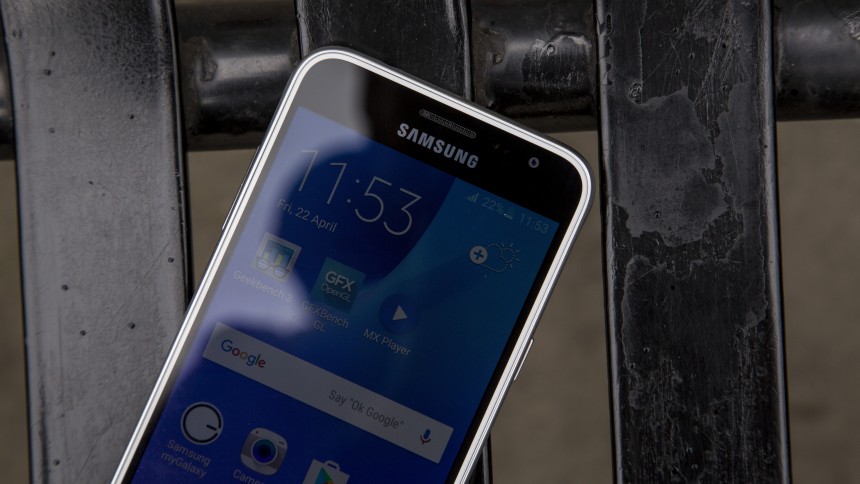 The Samsung Galaxy J3 is a great budget smartphone. It’s reasonably well made and has a great screen that leaves me wondering why more manufacturers don’t specify AMOLED panels on their cheap handsets.

The biggest problem the Galaxy J3 faces is the fact that its stablemate, the Galaxy J5, is better. That phone is not only faster, but also has a slightly better camera, a marginally bigger screen and better battery life than the J3. For a mere £10 extra, you can’t argue with the fact that it’s the better buy.

0 0 0
Previous ArticleCyanogenMod 14.1 Nightly Builds Based on Android 7.1 Nougat Released for Select Devices
Next ArticleMake the most of it – this might be the last Black Friday as we know it
Comments (11)