The TP-Link Talon AD7200 is the world’s first router to use the new 802.11ad Wi-Fi standard. Also known as WiGig, it offers up to 4,600Mbps transfer speeds, which is four times faster than the fastest 802.11ac Wi-Fi. However, the standard short range and can’t penetrate walls, so will be of limited use in many households as a result.

Thankfully, the Talon AD7200 can also service all your other Wi-Fi needs since it’s a fully fledged AC router too, and it comes packed with everything you’d expect of a modern high-end unit. What’s more, it’s priced no higher than many conventional AC Wi-Fi routers.

The TP-Link AD7200 is a pretty standard-looking high-end router. That is, it’s all black and fairly large, with dimensions of 230 x 230 x 43mm (WDH). Flip up its eight external antennae (there’s also one internal antenna) and its height rises to 123mm. With such a large footprint you’ll struggle to fit the unit on most windowsills or bookshelves, so you’ll probably need to dedicate a small table or dresser-top to it.

The lack of removable antennae is a bit of a shame, since it means you can’t replace them if you break one. Many alternative high-end routers provide this option. 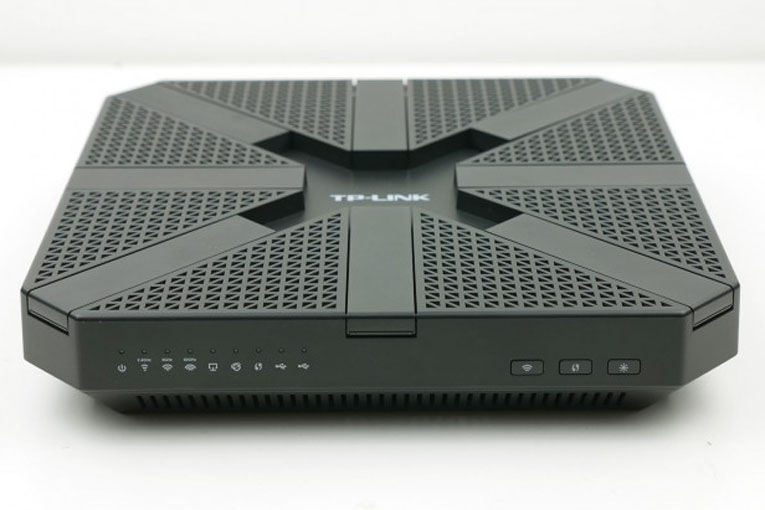 Round the back are four Gigabit Ethernet ports and the WAN port – like most non-ISP routers, you’ll need a separate modem – plus a couple of USB ports for sharing printers and USB hard drives. Both are USB 3.0, rather than the slower USB 2.0, allowing for quicker access to any shared storage. This remains quite rare feature, even on high-end routers.

Notably, though, those Gigabit Ethernet ports are theoretically too slow to keep up with AD Wi-Fi. They can deliver a maximum of 1,000Mbps, while AD Wi-Fi is rated up to 4,600Mbps. The reality is that the Wi-Fi would seldom reach such lofty heights anyway. Nonetheless, it’s an early indicator of just how fast AD Wi-Fi actually is.

On the front of the router is a good selection of indicator lights and buttons. Where some routers make do with only a single light to try to show the status of the router, here you get individual ones for power, all three Wi-Fi bands, LAN activity, internet, WPS and the two USB ports. In addition, you get a button that can turn all these off if you’d rather not have lights blinking at you across the living room. You also get buttons for WPS and Wireless On/Off.

Joining the new 60GHz band used for AD Wi-Fi are a 2.4GHz band and a 5GHz band for AC, N, G and B Wi-Fi. As such, this is what can be thought of as a dual-band router with the addition of AD, rather than what’s normally thought of as a tri-band router.

Traditional tri-band routers use one 2.4GHz band and two 5GHz bands, with the second 5GHz band used either to share the overall workload – as on the D-Link DIR-890L – or for communicating directly with other routers in a multi-router system, such as the Netgear Orbi. 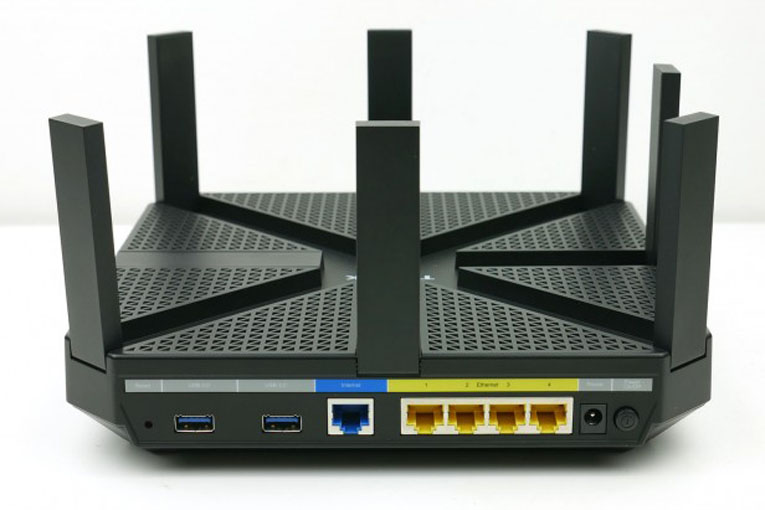 Otherwise, you get all the latest Wave 2 AC Wi-Fi features, including MU-MIMO. As such, the 5GHz band is rated to a maximum throughput of 1,733Mbps, while the 2.4GHz band can hit 800Mbps.

Unlike some modern routers there’s no band steering, also known as Smart Connect. This function conveniently combines all the Wi-Fi bands into one SSID, leaving it up to the router to sort out which band your devices connect to.

In the Talon AD7200, however, all three bands use separate SSIDs, meaning you’ll have to specifically select which one to connect to. That can be a headache where there are only two bands, so it’s definitely something that would put us off using a tri-band router such as this, given the short range of AD Wi-Fi.

TP-Link says it’s working on adding Smart Connect to a future firmware update, but we’ve heard this before with regards to several other routers (from various manufacturers) and been left waiting months and months for the update to appear.

Setting up the Talon AD7200 is straightforward. Once plugged in and powered up, you can either connect to the default Wi-Fi or plug a computer directly into an Ethernet port. Enter tplinkwifi.net or 192.168.0.1 into your web browser and you’ll get to the router’s menu.

Here you’ll be guided through a simple process for getting connected to the internet, changing the router’s default password and setting a Wi-Fi password. Alternatively, you can skip the setup and jump straight to the menu. 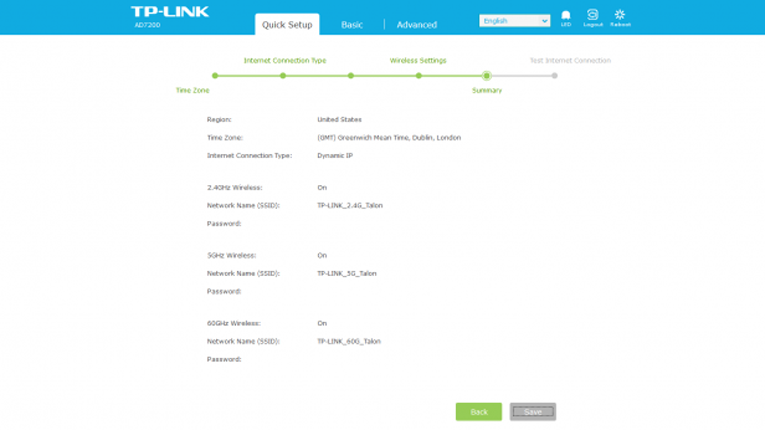 There’s nothing too out of the ordinary here, but neither are there any glaring omissions. However, there were a few gremlins here and there.

In particular, changing Wi-Fi settings often didn’t seem to work or any changes took some time to follow through. For more than two days I couldn’t get the 5GHz band to appear at all, and then suddenly it materialised. Certainly, I’d be inclined to wait until TP-Link has issued a firmware update – hopefully including the addition of Smart Connect – before buying this router.

Beyond setting up the router as you require, the next challenge is finding something to actually connect to the AD Wi-Fi. At the time of writing, there isn’t a single commercially available product on the market that can do the job, except another AD Wi-Fi router – useful for sharing an internet connection across an alleyway perhaps.

For testing we were provided with a laptop modified to include an AD Wi-FI adapter.

To test the Talon AD7200, I performed my usual router tests. These consist of checking that the Ethernet speeds are correct then benchmarking transfer speeds over the 5GHz and 2.4GHz Wi-Fi bands, as well as access speed for shared USB storage. I then install the router for a week or so to ensure it remains stable and reliable over a prolonged period.

Wi-Fi tests are performed with the router installed in the front room of a small, three-bedroom, end-of-terrace house, with one laptop attached via Ethernet. Another laptop is then positioned approximately 2m away and connected over Wi-Fi. LAN Speed Test is used to measure the transfer speed between the two laptops.

I then move the second laptop to the rear, ground-floor kitchen, where it’s about 5m away and with one brick wall between it and the router. Finally, I move to an upstairs rear bedroom, where the laptop is approximately 10m away from the router and with two brick walls and one wooden floor in-between.

However, for AD Wi-Fi, all these distance tests are superfluous since the signal simply can’t penetrate even one brick wall. Step through a doorway and out of line-of-sight and the signal stops dead.

As such, I simply measured AD speeds at various positions in the same room, varying my distance between 1m and 4m from the router. I found it was fairly consistent at all positions within the room, so have reported only one result. 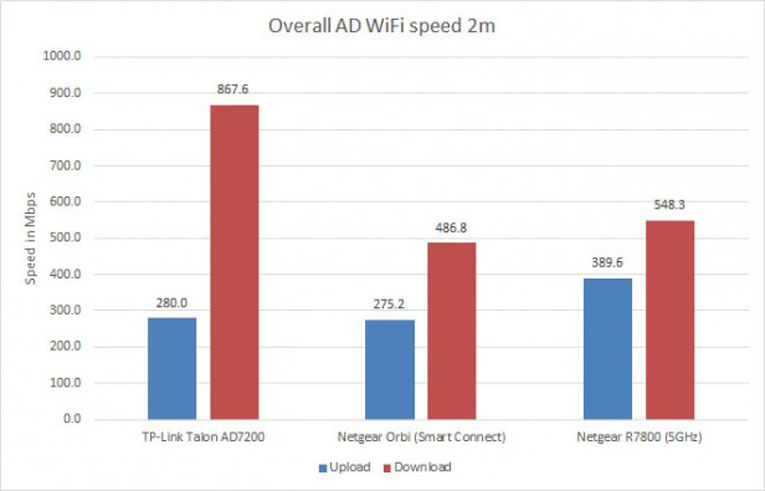 The Talon managed an average download speed of 867.6Mbps. That’s an impressive figure that comfortably beats any AC router. However, it’s less than double the speed of the fastest AC routers – which, given the promise of four times the speed, is a touch disappointing.

Crucially, though, it’s perfectly possible that the Gigabit Ethernet ports were indeed holding back maximum performance. Until we’re able to test transfers using two AD-equipped laptop, this is as good as it’ll get. 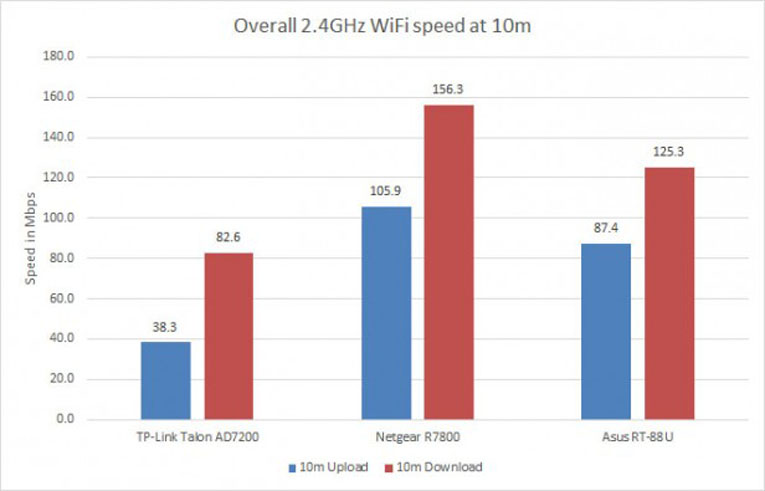 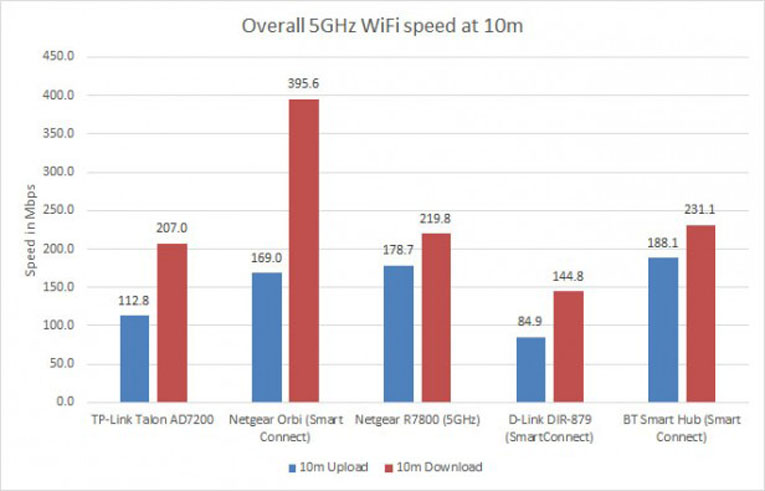 As for AC and N speeds, the Talon was fairly mid-table for both, with several other conventional dual-band routers beating it across the board. Meanwhile, USB speeds were in fact the slowest of the half dozen or so most recent routers I’ve tested, although not by much. 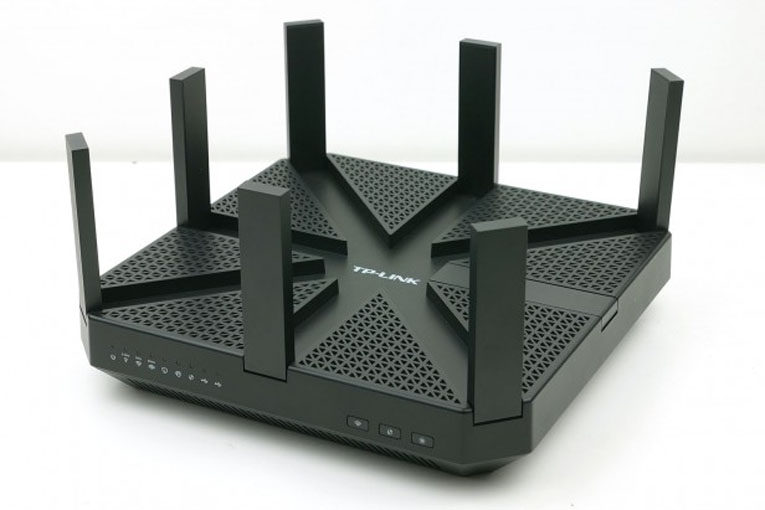 The Talon AD7200 lives up to its promise of delivering the fastest Wi-Fi speeds we’ve ever seen, thanks to the presence of 802.11ad Wi-Fi. However, it also makes clear the limitations of this new connection standard.

AD Wi-Fi is completely unable to penetrate even one brick wall and is generally limited in range, making it useful in only a handful of situations – wirelessly backing up large volumes of data and streaming very high bit-rate video being the two obvious ones.

Even then, at present there are no devices that can actually connect to an AD Wi-Fi router. Moreover, when they do arrive, the Talon AD7200 will still be of limited appeal until it can seamlessly switch between the speed of AD and the range of older Wi-Fi standards. Currently, this is a manual operation, and it will quickly become a chore.

As such, with a retail price of £350, the Talon – and likely most other AD routers, if this price is anything to go by – just doesn’t feel remotely worth the money right now. For most users, if you’re going to spend that sort of money, the more practical and convenient approach of a device such as the Netgear Orbi will feel like a better buy.

The next generation of Wi-Fi has arrived, and it’s mighty fast. It’s still a bit early for prime-time, though.

0 0 0
Previous ArticleOnePlus 4 could have a new design and masses of power
Next ArticleWith Fantastic Beasts and Where to Find Them, Harry Potter Magic Comes to Amazon.com
Comments (1)